We recently received a transfer of Salem-related materials from the Lane County Historical Society and Museum in Eugene.  Among the programs for the Apollo Club and Salem Symphony Orchestra, appeared an interesting invitation to the annual dinner given by the Ladies of the Grand Army of the Republic in 1910.  The postcard invitation (shown to the left) is postmarked December 29, 1910 and is addressed to Comrade Kinney, Salem, Oregon, Trade Street.  The “comrade” isn’t too strange of an address as the Grand Army of the Republic was a veteran’s organization for veterans that fought for the Union in the Civil War.  We are thinking “comrade at arms” rather member of the Communist Party.

The real mystery is the identity of Comrade Kinney.  With no information to go on from the original donor of the materials, we set out on a hunt to find a little more information about Mr. Kinney for our records.  No easy task.

Neither the 1909 nor the 1911 Salem City Directories list a Kinney living on Trade Street.  1909 has a Russell J. Kinney living at 761 Mill Street with a Jay Kinney boarding with him — the only two Kinneys living in Salem at the time.  1911 shows an additional Kinney in the area: Student Alfred Kinney living at 340 N Liberty.  In addition to the wrong address, his student status makes it unlikely he would have been even born at the time of the Civil War. Cross him off the list of likely suspects.  Russell J and Jay — now listed as J. Lester Kinney — reappear in the 1911 directory, having moved to 705 N 17th Street where they are listed as farmers.  Maybe in their move Russell and Jay spent some time living on Trade Street?

Maybe our current exhibit just makes me have beer on the brain, but I started looking through the directories for alternative spellings for Kinney, and came across a listing for Frank M. Kenney, the president of the Salem Brewery Association.  The 1909 listing states that Kenney was living in Olympia, Washington at the time.  But what if he received mail at the Brewery which had frontage on Trade Street?  As a prominent businessman with ties to the area, it would make some logical sense if the women of the organization wanted to invite him to their gala event.  A nifty theory, but the corporate offices for the Salem Brewery Association are listed in the city directories as 268 S Commercial Street.

GAR Medallion. For more information about the GAR click the photo above to visit the site of the GAR Museum and Library in Philadelphia.

Ok, so what do we know about Russell J. Kinney?  Could he have been a candidate for membership in the G.A.R?  The 1910 Census shows that Russel J. (age 64) and his wife Clara L. (age 54) and their son Jay L. (age 24) living in Butteville.  Russell is a laborer in a lumberyard and his son Jay is a general farm laborer.  The birth places of the three (Wisconsin, Michigan, South Dakota) give us a potential path to follow their progress across the U.S.  Being born in 1846ish, Russell would have been a little young, but potentially the right age to fight in the Civil War, being born in the North with parents born in Vermont and New York would suggest that his sympathies would lie with the Northern cause, making him a possible candidate for GAR membership which celebrated veterans of the Union Army.

A quick conversation with our volunteer and genealogy guru Sue Masse and we are on to the NPS Civil War Soldier and Sailor database.  There we find records for Private Russel J. Kinney assigned to Company M of the 6th Regiment West Virginia Infantry Volunteers.  The Adjutant General’s Report of the State of West Virginia for the year ending 1864-1865. records Kinney as being mustered into service on August 13, 1862.  His age in 1864/65 is listed as 18, suggesting he was just 16 years old when he enlisted, which would match our Russell J. Kinney’s estimated birth date of 1846.  It should be noted that there are three other Russell Kinneys listed in the database serving in the 124th Regiment, Ohio; the 1st Regiment, Michigan; and the 7th Regiment, Veteran Reserve Corps.  There is also a Private Russel J. Kinne listed as serving in the 38th Regiment, Wisconsin Infantry, which would have been much closer to our Russell J.’s birthplace.  Federal  Census records and the West Virginia Death Index show a Russell J. Kinney living in West Virginia in the 1870 with his wife Amanda and son Ellsworth and dying in West Union, Doddridge, West Virginia in 1913.  With this in mind, it appears that the Wisconsin Infantry Private Kinney is probably our man.

A little more noodling around on Ancestry.com fills out the story of Private Russell J. Kinney.

Our Russell J. Kinney appears to have been the second son born to farmers William and Lucina Kinney in Pierce County, Wisconsin.  By 1860, he was living with his sister and four brothers on a farm in Perry, Wisconsin.

The Roster of Wisconsin Volunteers: War of the Rebellion with Research by Harold Slavik indexed by Ancestry.com lists Russell J Kinne enlisting on July 9, 1864 from Cross Plains, Wisconsin.  He was attached to Company I, Wisconsin 38th Infantry Regiment on 7 September 1864 and mustered out on 2 of June 1865.

After his time in the service, a 20 year old, freshly decommissioned Russell married a 13 or 14 year old Clara Lavina Terpening on July 8, 1866 in River Falls, Pierce County, Wisconsin.[2]  They would have six children including daughters Lodema, Ida and Della and sons Clifton and Jay.  By 1910 the family had relocated from Pierce County, Wisconsin to Butteville, Oregon and only three of their six children were still living.[3]  By 1913, Russell, wife Clara and son Jay are listed in the Salem City Directory as living at 1529 A Street, farming. 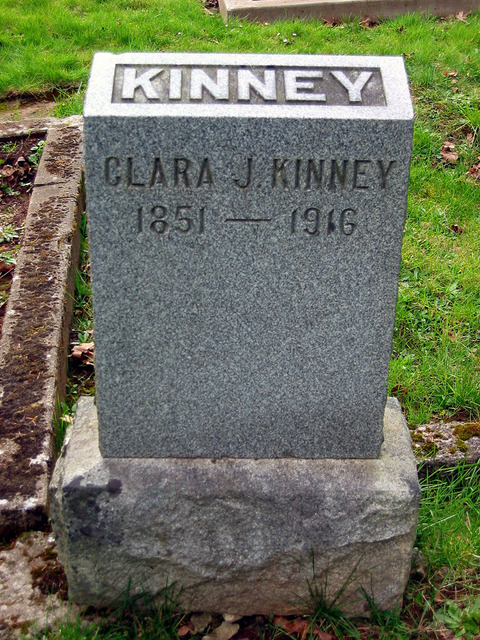 Clara Kinney Gravestone, Pioneer Cemetery, Salem, Oregon. Photo by: Tracy Saucy. To read more about Clara click on the photo above to be taken to the Pioneer Cemetery Website.

Clara died June 3, 1916 in Newberg, Oregon.  She is buried in the Salem Pioneer Cemetery.  Russell appears to have continued living in Yamhill County.  A 70 year old Russell is enumerated in 1920 Federal Census living alone with a servant named Mae Nordyke (age 54).  An interesting twist occurs in the story when we find a marriage certificate for Russell Joslyn Kinney dated June 12, 1924 which shows him marrying Althea Madora McCabe in McMinnville.  He was 74 at the time, she was 67.  Whether it was love, loneliness or the prospect of a healthy pension, the union lasted a little less than a year.  In that time, Kinney relocated to Douglas County, Oregon where he died February 23, 1925.[4]   He is buried in the Roseburg National Cemetery in Section A, Row 15, Site 8.[5]  His sudden relocation to Douglas County suggests he may have been admitted to the Old Soldiers Home in Roseburg, but we haven’t found any documentation of that fact. With this information, we can now identify the card’s owner in our database as Russell J. Kinney.  One down, thousands to go.

[2] According to the Death Certificate and Gravestone references sited in the Pioneer Cemetery Database, Clara was born either on October 5, 1851 or 1852.  If 1852, she would have been just shy of her 14th Birthday when she married in July.